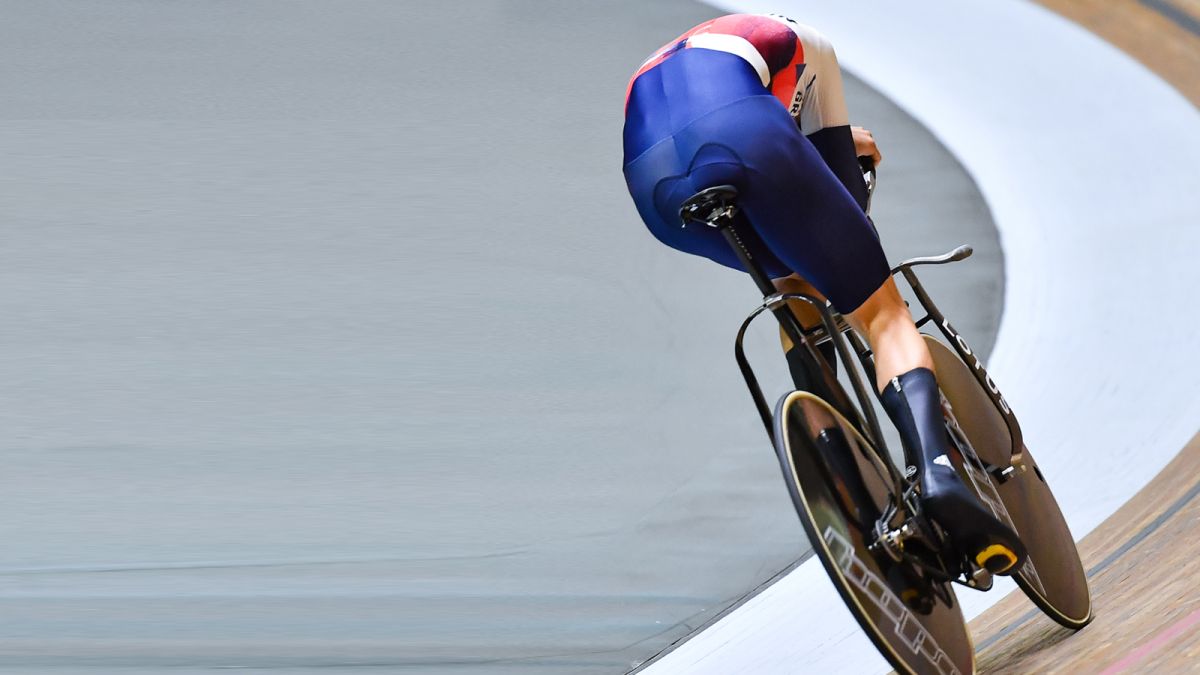 When it comes to track cycling, especially at the Olympics, the margin between winning and losing often comes down to thousandths of a second. As a result, the Olympics track events can be an arms race as national federations look to eke out every last watt, second or millimetre out of their setup.

Towards the end of 2019, with just months until the then-expected start of the Tokyo Olympics, Team GB unveiled a radical new track bike with wide fork legs and chainstays.

That bike is the Lotus x Hope HB.T, an all-new carbon fibre track bike that utilises 3D printing technology as well as an interchangeable cockpit that allows it to transform between a mass-start drop-bar bike and a pursuit-style bike with base bar and aero extensions.

As the name suggests, the bike is a collaboration between two British brands Lotus and Hope. Lotus, a car manufacturer by day, has a history steeped in cycling and is famous for the Lotus 108 ridden by Chris Boardman in the 1992 Olympics. Hope Technology, a cycling-based engineering company based in Lancashire, is prominent in mountain biking as a manufacturer of components and makes everything from brakes to groupset components, as well as a carbon fibre bike of its own, the HB130. The collaboration was supported by Renishaw, an engineering technologies company that aided with the 3D printing process of certain components.

The immediate stand-out feature of the Lotus x Hope HB.T is the wide position of the fork legs and chainstays.

The reason for this is to consider a ‘bike and rider’ approach to aerodynamics. When travelling at the speeds that track cyclists travel, air resistance is the biggest obstacle to speed. It was therefore decided that by moving the fork legs and seat stays outward and in line with the rider’s legs, the bike would better deflect the air around the rider, resulting in better overall aerodynamic performance.

The frame is made using carbon fibre, or more specifically, ‘carbon fibre, pre-impregnated material, autoclave processed’ according to our sources at British Cycling. It then uses 3D printed titanium for the dropouts, the lug that adjoins the seat stays to the seat tube, as well as what would be considered the crown of the fork.

The 3D printing technology continues into the cockpit, too, with the same ‘additive manufactured titanium’ construction used for all available handlebar choices.

The bike’s cockpit is interchangeable, meaning the same frame design will be used by all Team GB riders, no matter what events they’re competing in and what handlebar they use. Each rider will have their own individual, bespoke design custom moulded to maximise their aerodynamic performance and best match their ergonomic requirements.

As with any track bike, the drivetrain used by Team GB will feature a single, fixed gear. However, Team GB have opted for a shorter-pitch chain. Such is the novelty of this approach, we’ve already covered Team GB’s short-pitch drivetrain in a separate story.

Instead of the usual 1/2-inch pitch chain, the team have opted for a 3/8-inch pitch, which offers a greater number of teeth for the same sized chainring, offering more points of engagement and helping to distribute the torque more evenly throughout the chainring and sprocket, thus increasing its efficiency.

The chain in question is the Velo CT-T from Renold, which retails for a cool £450.00 per chain, and the chainrings and sprockets are understood to be manufactured by Hope.

The wheels are also made specifically for this project, courtesy of Hope. However, they are novel in their construction in that instead of a multi-part construction, typically two sides bonded together, they are designed in a monocoque construction, making the entire wheel in one process.

Riders have a choice of a disc wheel, which will offer greater aerodynamics thanks to its solid construction, or a tri-spoke wheel, which maintains a complete carbon fibre construction, but with three bracing points – spokes – between the central hub and the outer rim. The tri-spoke design is usually lighter in weight and more manoeuvrable as a result.

While unconfirmed by Team GB, from the images we have from the team’s recent holding camp at the Newport Velodrome in Wales, it appears Team GB are also using a different tyre size at the front to that used at the rear. Cyclingnews understands the team is using Vittoria’s Pista Speed tyres both front and rear, but it looks as though a larger volume tyre is being used at the rear.

According to Chidi Onuoha, Communications Officer at Team GB, the bikes will be fitted with saddles from Simmons Racing – a British composites manufacturer that specialises in cycling saddles and shoes, as well as ice skating speed skates. Two saddles are on offer, the Simmons Pursuit and the Simmons Sprint, for their namesake event types.

The cranks are said to be the Zed 2 Track crank from Look components, however, riders have also been spotted using the power meter crank from Infocrank.

Want to buy one?

You can, but it’ll cost you. The UCI (Union Cycliste Internationale, cycling’s governing body) rules state that any product used at the Olympic Games must be available for purchase by the general public.

Article 1.3.006 from the Clarification Guide of the UCI Technical Regulation states: “Equipment shall be of a type that is sold for use by anyone practicing cycling as a sport”.

However, despite leeway being available for prototypes in most UCI sanctioned events, the Olympics sees a different set of rules, as rule 11.1.010 in the ‘UCI Cycling Regulations, Part 11 Olympic Games’ rulebook states:

“The equipment to be used during the Olympic Games must comply with the UCI regulations, and particularly with Article 1.3.006.