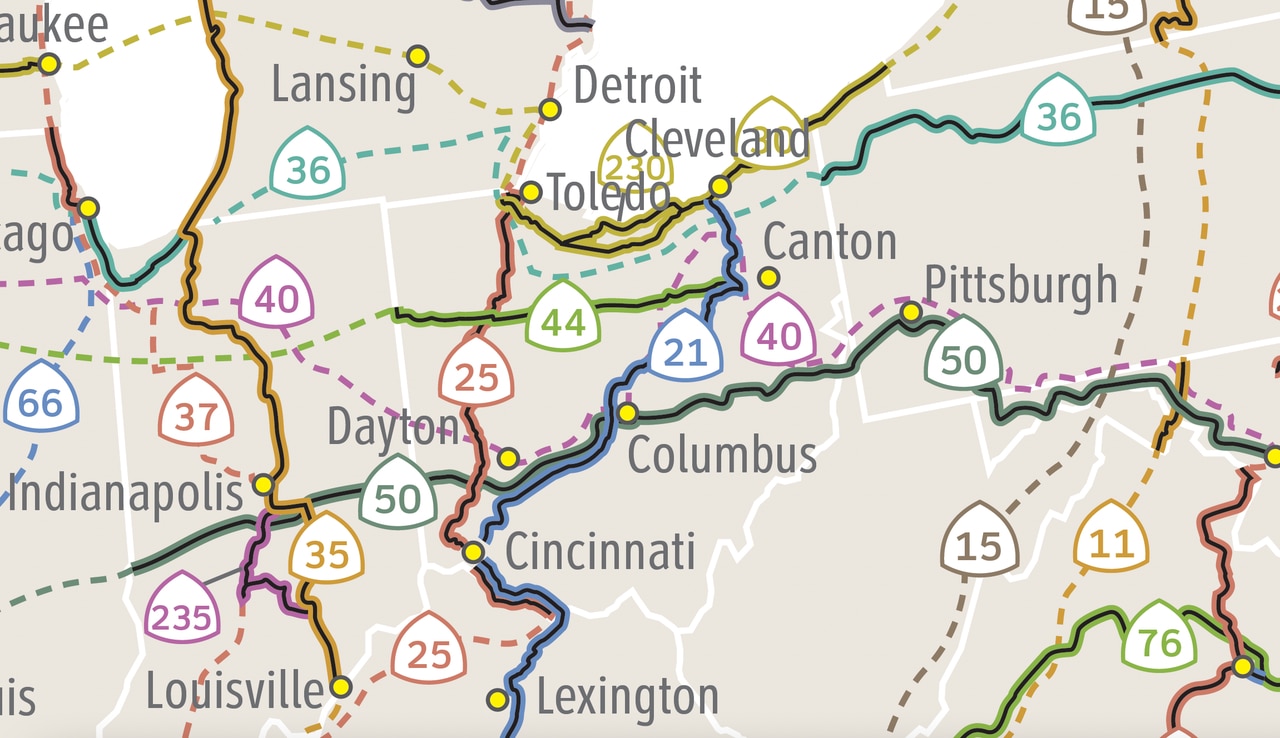 CLEVELAND, Ohio — Imagine starting a bike ride on the Towpath Trail and pedaling all the way to Pittsburgh, Washington, D.C. or even Atlanta.

A new frontier is opening for bike travel. A growing network of designated routes is being pieced together across the nation along low-traffic roads, trails and bike lanes by the same association that designates Interstate highway numbers. The American Association of State Highway and Transportation Officials (AASHTO) established the US Bicycle Route System in 1978. However, it’s only recently begun to take shape.

There’s more than 17,000 miles of U.S. Bicycle Routes across the country. Ohio boasts 1,523 miles, more than any state in the nation.

In the age of the automobile, road trips have thrilled millions of travelers with the allure of the open highway. As roads become more open to bikes and as trails expand, that sense of adventure is giving rise to a new kind of tourism. For people willing to spend multiple days on their bike, trail trips may become the new road trip.

The Adventure Cycling Association describes U.S. Bicycle Routes as signed roads and trails that direct cyclists to a preferred route through a city, county or state.

Over the past decade, the number of U.S. Bicycle Routes has grown exponentially. There are now over 17,000 miles designated across the country. Ohio has 1,523 miles, more than any state in the country.

This month, 1,177 miles of new U.S. Bicycle Route were designated in Ohio. To put that into perspective, Jennifer Hamelman, USBRS Coordinator and Safety Liaison for the Adventure Cycling Association, noted “this has not happened since 2011 when Alaska designated 1,414 miles.”

Future expansion: Plans are for USBR 21 to connect Cleveland and Atlanta.

Within state boundaries, USBR 21 follows the Ohio to Erie Trail and connects the big three Ohio cities of Cincinnati, Columbus and Cleveland. Incredibly, over 70 percent of this route involves off-street trails. An absolute must for Ohio cyclists to experience.

This route is a southern extension of the Ohio to Erie Trail (US Bicycle Route 21 North). It follows the Ohio River for over 50 miles and ends in the village of Aberdeen near the Kentucky border.

Future expansion: The route is planned to extend from northern Michigan to Mobile, Ala.

This long route includes the cities of Toledo and Dayton before ending north of Cincinnati. Much of the ride time is spent in rural countryside and small towns. It includes one of Ohio’s gems, the Great Miami River Trail.

This is an alternate route off USBR 25 through Piqua, a city of over 20,000 people. USBR 225 travels along the opposite bank of the Great Miami River.

This route mirrors US Bicycle Route 21 South and runs along the same corridor between Cincinnati and the village of Aberdeen.

Future expansion: Planned to extend from the east coast of New Hampshire to Montana. A ferry crossing from Michigan to Wisconsin will be included.

The green sections in the map below are bike trails. You’ll notice major segments of the North Coast Inland Trail from Elyria to the small town of Elmore, Ohio. There are also two trail segments of Cleveland Lakefront Bikeway and the recently completed lakefront trail in Euclid.

Route 230 is a scenic alternative to the previously mentioned Route 30. It hugs the Lake Erie shoreline as much as possible from Lake Road in Rocky River all the way through Sandusky. It ends in Fremont, where cyclists can rejoin US Bicycle Route 30 and continue toward Toledo.

Future expansion: Plans are for this route to run from Ohio to Davenport, Iowa.

This bike route starts in Massillon at the Ohio & Erie Canal Towpath Trail. It travels west on the Sippo Valley Trail and then joins rural roads including the old Lincoln Highway all the way out to Fort Wayne, Ind.

This route traverses Ohio and allows riders to see the state’s forests and farmlands alike. Beginning in Jackson Township on the Indiana border, it crosses Dayton and Columbus to arrive at Steubenville on the West Virginia border. Around 45% of this route is on bike trails.

US Bicycle Route 50A (Alternate)

This alternate route north of USBR 50 provides some other trail opportunities for travelers along the Indiana to West Virginia route. Specifically, it includes the Genoa Trail, Hoover Scenic Trail and the Thomas J. Evans Trail.

Only State Departments of Transportation have the authority to apply to AASHTO for designation of U.S. Bicycle Routes.

“The designation of these routes is contingent on the support of the local authorities that own and maintain the roads or trails where the bike routes are located,” said Cait Harley, Safe Routes to School and Active Transportation Manager for ODOT’s Office of Program Management.

“That means that local counties, cities, villages, ODOT and park districts must be in support of the routes before ODOT can apply for formal designation,” she says.

Based on a national corridor plan developed by AASHTO and the Adventure Cycling Association, ODOT analyzed potential routes based on attributes like roadway speed, traffic volume, presence of bike facilities, topography, continuity and community input.

When asked about Ohio having more USBR mileage than any other state, Harley attributed the milestone to two factors: Long-term trail building efforts across Ohio over the decades and the more recent development of a strategic bike network for the state.

She was quick to include the Clean Ohio Trails Fund, as well as other state and federal funding, as having contributed to the success.

“The ability to align our USBRs with these trails truly puts Ohio on the map and elevates the potential economic impact of bicycle tourism from across the nation,” she said. “But our strategic bike network is a lot more than tourism. Biking is an essential transportation mode and we know that in Ohio, people are biking for transportation, recreation, and tourism.”

In addition to the U.S. Bicycle Routes, there are also State Bicycle Routes that connect Ohio’s 17 largest population centers and destinations.

The Adventure Cycling Association notes on its USBR resources page that most U.S. Bicycle Routes are designed for adult, experienced cyclists defined as those 16 years of age or older, with at least a few years of bicycling experience.

Organizations like the Adventure Cycling Association are not the only ones with big plans for our region. Rails-to-Trails Conservancy has a grand vision of a cross-country bike trail built primarily over former railroad corridors. Their Great American Rail Trail proposal goes right through Ohio.

Completion of the Towpath Trail in Cleveland hailed as a milestone

Should you ride on the roads or trail at Cleveland Metroparks?